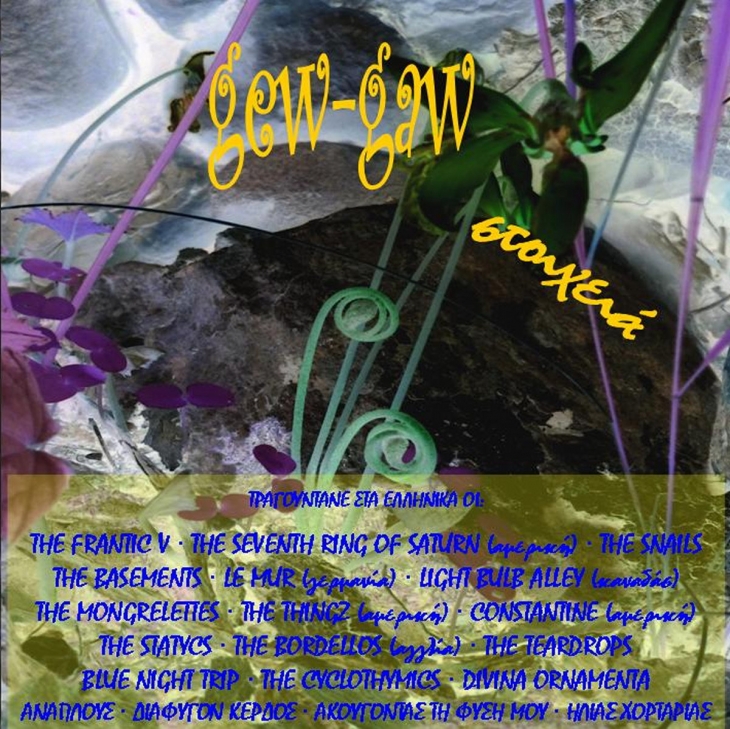 New issue of Gew-Gaw fanzine (in greek) incl. cd compilation with 15 Greek bands, 1 from Germany, 1 from England, 3 from USA, 1 from Canada.
All the bands sing in Greek!!!! 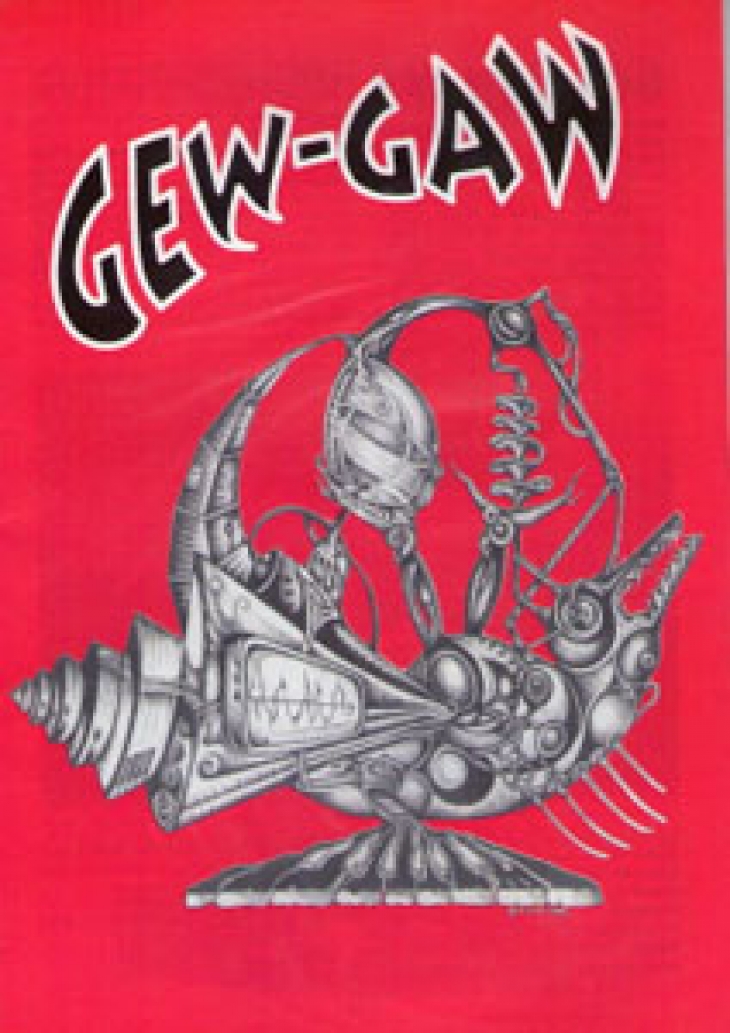 Ok guys, here we have the new album by The Snails,after the titled first which was released in 2011! Here Snails have left many of the garage sound, the tracks are quite sophisticated and of course some songs sound sufficiently psychedelic. 14 new songs (of course unknown how many will be on the vinyl that will come soon!!) some of which are amazing the less!Sunshine, a very beautiful song, with Mimis of Yesterday Thoughts on the organ, in the measures of Green On Red and their album Gravity Talks,and a arousing solo guitar by Dimitris Delis, the psych/garage dr. acid with the super heavy/psych fantastic introduction the incredible super-song burning boy where should be heard very loudly  to everyone felt the tension that hides in every note and every verse, the highly revival and psychedelic 7 minutes a thousand miles with which I brought to mind the album Zailon by No Man's Land but in the more advanced since the use of theremin adds an extra psychedelic smell, falling dawn, where Evdokia from the Meanie Geanies participates in the organ while singing the most talented singer in the whole garage/psych (and not only) scene, Dimitris Beleniotis (Cardinals) and which I think (why I think, I'm sure !!!!) that is one of the most beautiful songs that it was recorded by a Greek band from the 80s to now, the psych/garage instro mairmadewith psychedelic guitar playing, and finally the ultimate psychedelic ballad I'm on fire, with a guitar, towards the end of the song to embroiders literally soft and dreamy melodies! That yes, it is a psychedelic song and the small masterpiece of Snails! Excellent tracks are also the more garage/rock shadow land, final draft, and overflow, as the unbelievable otherside, while finally the cataclysmic punk ofmind control and the most original garage songs psycohtrain and she's like my girl complete a great album!! Keep your eyes and your ears open for the vinyl edition (can we ask the label to release it double lpfor no song stay out of it?)
Εντάξει παιδιά, εδώ έχουμε το νέο άλμπουμ των Snails, ύστερα από το ομώνυμο πρώτο τους το οποίο είχε κυκλοφορήσει το 2011! Εδώ οιSnails έχουν ξεφύγει αρκετά από τον γκαράζ ήχο, σε αντίθεση με το πρώτο άλμπουμ , εδώ δεν υπάρχει καθόλου φυσαρμόνικα, οι συνθέσεις είναι αρκετά πιο περίπλοκες και φυσικά σε ορισμένα τραγούδια ο ήχος είναι αρκούντως ψυχεδελικός. 14 νέα τραγούδια (άγνωστο φυσικά πόσα θα βρίσκονται στο βινύλιο το οποίο θα έρθει σύντομα!!) ορισμένα εκ των οποίων είναι τουλάχιστον καταπληκτικά! Το sunshine, ένα πολύ όμορφο τραγούδι, με τον Μίμη των YesterdayThoughts στο όργανο, στα μέτρα των GreenOnRed και του άλμπουμ τους GravityTalks, και με ένα απογειωτικό σόλο στην κιθάρα από τον Δημήτρη Δελή, το psych/garagedr. acid με την σούπερ heavy/psychισοπεδωτική εισαγωγή, η απίστευτή τραγουδάρα burningboy όπου πρέπει να το ακουστεί πολύ δυνατά για να νιώσει κανείς την ένταση που κρύβει σε κάθε νότα και σε κάθε στίχο, το άκρως αναβιωτικό και ψυχεδελικό 7λεπτο athousandmiles  το οποίο μου έφερε στο μυαλό το εξαιρετικό άλμπουμ των NoMan’sLand, Zailon, αλλά στο πιο προχωρημένο μιας και η χρήση της θερεμίνης προσθέτει μια επιπλέον ψυχεδελική οσμή, το fallingdawn, όπου συμμετέχει η Ευδοκία από τιςMeanieGeanies στο όργανο (όπως και στα I’mOnFire,

The Snails interview in Last Day Deaf by Dimitris Koutoukakis

On 27th of January The Snails are going to participate and play in Merlin’s Music Box rock fest night at ILION Plus. As a band of pure garage / rock’n’roll is going to electrify your senses and purify your mind…But before entering the club to listen and dig their music…let’s have a conversation with  The Snails…

Hails to The Snails…Well guys welcome to Last Day Deaf and I hope success in all your music efforts!!! Now let’s begin…Could you give us a short bio of the band and then tell us what led you form The Snails? How did you come up with such a name?

We were formed officially as a band in 2005.  After a few member changes, the current composition of the band is:  Chris (vocals and rhythm guitar), Lambros (guitar, vocals), Stavros (bass) and Anestis (drums, vocals).  We created the band based on our love for music and music creation and our influences come from the 1960s rock and garage scene and its 1980s revival.  Our name was given by our bass player at the time, casually, in reference to an after rain rehearsal we had.  We liked it and so we adopted it.  Later on we discovered there was a band with the same name during the 1960s!

Your sound and play is for sure garage (and rock’n’roll of course). However, how would you describe in your own words or do you think that music isn’t about genres and definitions but it’s all about energy and feelings?

Our songs express the explosion of our emotions and describe our experiences.   We play garage music in our own way by breaking the mold and without following trends. Our guide is only music.

In order to play garage music do you have to follow a certain way of life and thinking or it’s just notes to be learned and played?

Every man acts according to their experiences and influences.  Music definitely is a determining factor for the attitude and behavior of each person since it is experiential and therefore uncontrolled.  Just like everybody else, we live and work in this society so we create music within it.

What’s your inspiration when you compose a song concerning music and lyrics? Also describe us your writing process…

Inspiration is an arbitrary notion, it appears when you least expect it, in various situations, love, circumstances etc.  All of our music is created using everybody’s participation.  Every track begins as an idea which evolves during the rehearsals until it takes its final form.  By then usually someone writes the lyrics and the rest of us add or subtract something until that part is also complete.  So, you can say that our songs are the result of team effort and improvisation during rehearsals.

What are your influences? Name us 3 of your beloved bands (old or contemporary).

Our members come from various musical backgrounds but we all agree that our great loves are: 13th Floor Elevators, The Seeds, Love, Dead Moon.

How hard is not only to make a record in Greece but also to run a “non commercial” band? Is there solidarity among garage bands in Greece in the manner of creating a musical movement or is such a thing a utopia?

It is extremely difficult in Greece today to be in a band, let alone to try to record your ideas.  The cost is huge but it cannot prevent your need to create.  Therefore, during the crisis, a lot of new bands were created and their desire to express themselves came above anything else.  It is a certain craziness that leads those bands to insist on making music so it is hard to see a musical movement getting created.

As we already said, the bands are trying to express themselves in any way they can.  But the situation in general is tragic and the specific scene is small.  Internet has helped in certain matters since it gives the opportunity to the bands to be heard even to the most unlikely places.  Things are tough but the fact that some bands are performing in European tours and live concerts in the USA is very encouraging.

Your first album ‘The Snails’ (Action Records, 2012) was re-released  in 2014 by Beluga Records (Sweden) on vinyl format. What led you to this decision and how was that experience? Is there more professionalism abroad?

Our experience with Beluga Records was very good because there was a timeframe for everything (the “when”, the “how”, the “what”) which was by all means met.  Certainly there is more professionalism and a greater financial flexibility because it is a larger market.  These are the reasons why we gave Beluga the right to release it on vinyl format.

On 27th January  you ‘re going to play in Merlin’s Music Box festival with Birthday Kicks and Youth in Outer Space. How do you feel about this gig? Do you prefer the live playing more than the studio recording? Are you going to present some new stuff,  and if so, please tell us some things about your new work.

We are very honored and looking forward to playing in the festival organized by the historical fanzine of Merlin’s Music Box.  Live performances are so different than rehearsals and studio recording.  We enjoy both.  In our most recent live concerts we have introduced our new songs from the album  currently released digitally on our page in bandcamp.  Having released 14 new songs, entirely our own, which show our musical evolution and seeing peoples’ reaction to them, we can say the messages we are receiving are very encouraging.

Would you like to share with us some of the coolest moments of your musical experience either from live appearances or from anything that is related to the band?

Definitely our live concerts with Baby Woodrose and Vibravoid have been exciting experiences since we had the chance to also meet them on a personal level.  We have enjoyed the collaboration with friends from the domestic music scene, during live appearances and recordings.

So guys this is it….thank you for your time!!! Enough with talking and asking (hahaha)… I’ll let you make some fine garage music….But before that tell us your future garage plans and how people can find and listen to your music.

We give live concerts, introducing our music to the people and we are expecting the release of our album in vinyl somewhere in the beginning of the summer.  Until then, you can listen to our songs and learn our news through our official website which will very soon have a completely new form.

This email address is being protected from spambots. You need JavaScript enabled to view it.